Painting Over the Past

Sometimes it's easier than you think.  I've had this Shoei X-11 helmet since near the end of my crotch rocket days. It really has been one of my favorite helmets. I have never had a helmet as light, comfortable, and with as great air flow as this one.  The problem is... well it doesn't quite fit my style any longer. 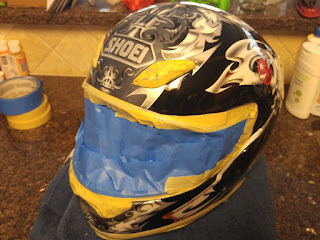 I had lunch the other day with a friend of mine who loves Plasti-Dip. No, really. He's used it to paint numerous things including his jet ski. He also painted his car. I don't just mean his wheels, I mean he painted his entire Honda S2000 with Plasti-Dip chameleon kaleidoscope!  Well I figured if he was comfortable enough to do his car, I'd be willing to give it a try on something... just not quite my car. 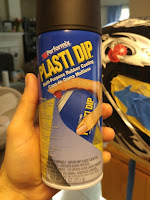 Since the project wasn't all that large, and not knowing how it'd turn out, I didn't want to invest in a quart of the stuff. Instead, I was excited to learn you can buy a rattle can of it at your local big box home improvement store.

I started by wiping it down really well with alcohol... the rubbing kind, not the drinking kind... then taped over all the plastic pieces and trim. (The picture above.) 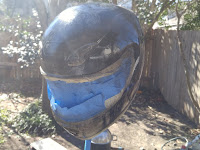 From there, I treated it like a normal rattle can job. I lightly dusted for the first few coats. Then followed it up with a couple of solid coats.


After letting it dry for a couple of days, I then proceeded to peel off the masking tape.  This was really the only part I had trouble with.  Since it creates a rubbery skin over everything, removing the tape tends to want to remove ALL of the Plasti-Dip, kinda like peeling a sunburn. 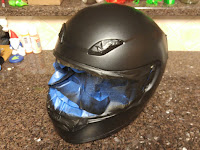 This was easily solved though by tracing the mask line with a razor blade prior to removing. I could've been a little more careful during this part as there were a few areas that I pulled up a bit more than I intended.  I found too this was fairly easily fixed by using a wet cloth and rubbing the coating back into place.

It turned out pretty good but not great.  In all fairness though, most of that was due to my impatience and not taking my time either masking off areas, removing the mask, or both. 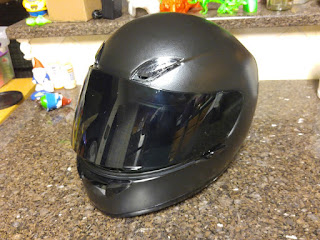 I'm pleased with the result and, more importantly, it allows me to get a couple more miles out of one of my all time favorite helmets.  Now to see how it holds up.

Overall, the Plasti-Dip was no more difficult to work with than the typical rattle can.  Will it replace my normal, go-to paint for quick jobs (i.e. hi-temp BBQ paint), probably not. But I will likely be using it for some things in the future.