So with his new look, I decided to try to make a mold with the bear tonight. 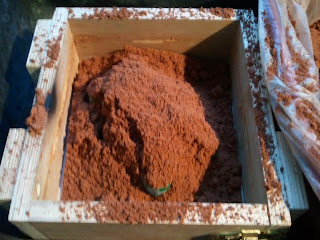 I took my time and started by sifting the sand that would contact the pattern. 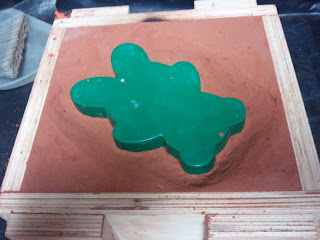 I decided to make the parting line halfway down on the outside to make drawing it a bit easier. Of course, that meant I had to dig it out down to that level which took considerable time. In addition, it left the edge loose which I had to go back over with a small "sculpting" tool (a.k.a. shellfish fork from the dollar store). 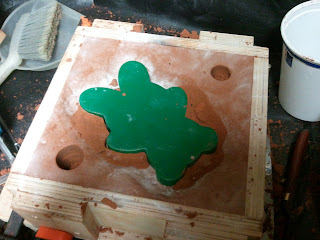 When I went to separate the flasks, some bits from the cope ended up staying with the drag. I'm not entirely sure why this happened. Maybe not enough parting dust? Or possibly I didn't ram the cope enough? 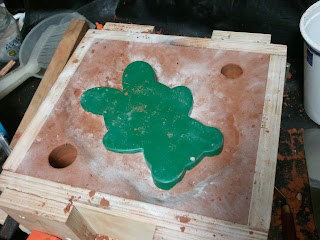 Either way, I just added additional parting dust on top of that and considered it part of the drag. 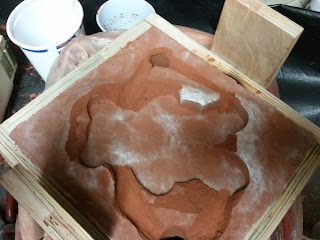 I dug the runners though, as a slight deviation, I did them in the cope rather than the drag. I did this since my parting line was so low on the pattern but also because I had help starting it from the sand that decided it wanted to be part of the drag. 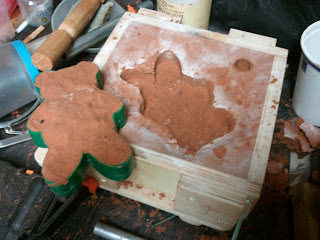 Then it was time to draw the pattern. Of course the Petrobond stayed inside. Dammit! Dammit! Dammit! Not enough parting dust? Rammed too hard? Who knows. I fucking hate this bear. 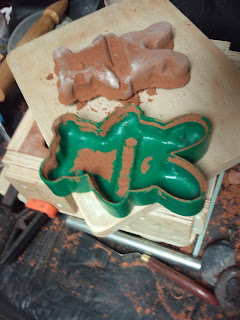 The exposed "core" shows the story. Not enough parting dust and, I'll admit it, the paint was still a bit sticky. Remember the 48 hours between coats in the instructions? 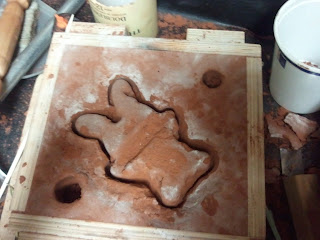 Because I'd spent so much time on it, I decided to try and get the sand out in a whole piece and reposition it back in the mold. I knew it wasn't going to be a usable casting but I decided to pour it anyway. My hope was that this would expose any additional gotchas that'd I'd run into. 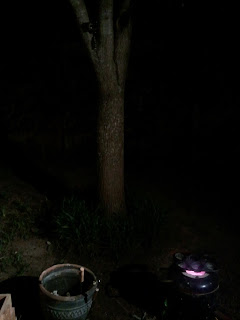 So I fired up the furnace. Notice the GoPro stuck in the tree, I had it in time lapse mode. (Once I get around to it, I may piece together a quick video. No promises.) 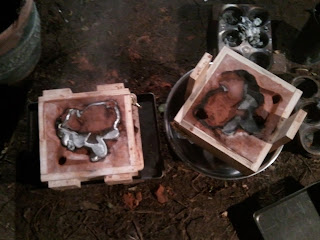 Then I poured it which went okay except... I completely underestimated the amount of aluminum needed which resulted in a short poor. Looking back, I'm glad I went ahead with the pour. I would've been heroically pissed if the the mold came out perfect and I screwed it up at this point.

I hate you bear!