Serving up some colored Jars.


After finishing up the attempt at the bear pour the other night, I wasn't quite ready for bed. (Well, technically, it was early yesterday morning. Damn, insomnia sucks. Especially if you're my neighbor.) Instead, I decided to test out the OF jar patterns to which I had applied my "festive" repairs. 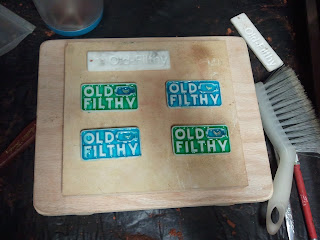 Everyone laid out nice an pretty. I through in an MF pattern since there was a bit of extra space. You'll note, they're laying on spacer board I made which is on top of the lower pattern board. 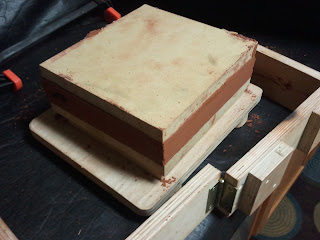 With the drag rammed, I've flipped it over on top of a second spacer board and popped the flask. 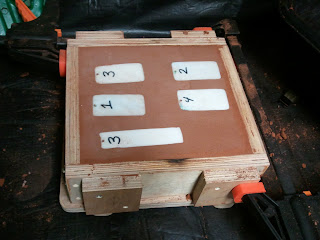 This allows me to reposition the mold within the flask but still keep a nice flat parting line. It is probably overkill but the main reason I'm doing it is because I'm starting to get low on fresh Petrobond. I definitely need to figure out how to recover it.

I've shown the steps I follow to create the parting line, ramming the cope, cutting runners, etc... I haven't changed anything in those steps since last time so I won't rehash it here. 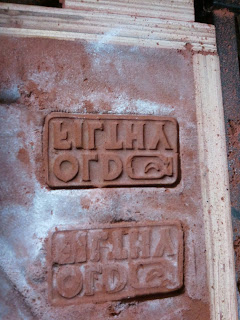 After splitting the flask, I was able to draw the patterns MUCH easier than before. I didn't have near the trouble with sand sticking in them thanks to shallower recesses and curved edges created by adding the colored epoxy filler. Only one of them was trashed but that was because the pattern appears to have shifted at some point while making the mold. Most likely it was when I was digging down to the parting line and it definitely was before ramming the cope as you can see two distinct impressions in the Petrobond. 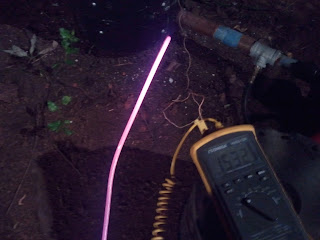 Then it was time to fire up the furnace again which was still warm from the short bear pour a little over an hour ago. It got up to temp really quickly and was running nice and hot. How hot? Well, hot enough to do this to my steel thermocouple and set a new high temperature record for my furnace (1532 °F)! 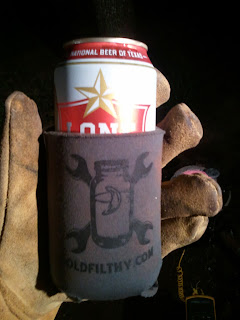 A quick swig for good luck! Hey, I didn't do that for the short bear poor, maybe that's why it went wrong. Yeah, that's it... not my complete lack of skills or knowledge in casting. 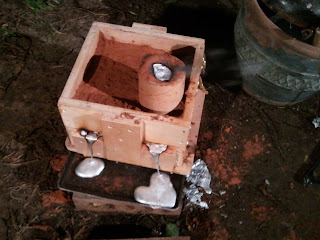 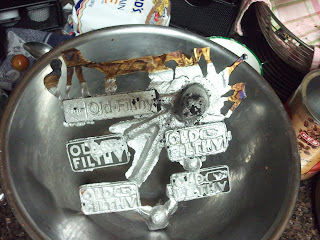 Finally, after a couple of hours to cool, I was able to pull it from the Petrobond and see how it went. The areas where the splooge (or whatever you decided to call it) squirted through turned an interesting rainbow of color. A result of out gassing from who-knows-what chemicals they use in plywood, I presume.

My take of the result: meh. I knew the one that shifted (top right) was ruined. The one on the lower left was trashed too. It looks like it may have shifted as well. The middle left and bottom right were okay-ish. I could probably clean up the rough inner areas with the Dremel but I think I'll just remelt them all except the MF which I kept for now. It was messed up a bit by the flask lifting but I think it might be fairly easy to clean up on the belt sander.